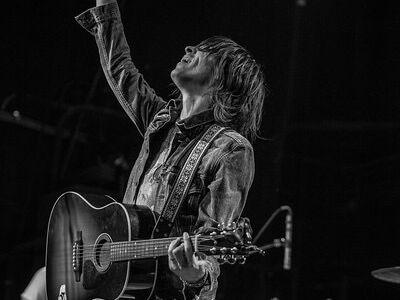 Brent James knew what he wanted from an early age. He began singing with his mother in the front seat of their car and around the house while his father worked as an autoworker in Saginaw Michigan. James had a pretty good grasp on where he came from, always embracing his blue-collar roots. He began writing songs at the age of 9 while mowing lawns and doing chores for family all while telling his parents he would “move to NYC and become a singer one day.”

After fronting a couple bands and getting some touring under his belt, Brent knew it was time to make a leap. He packed up his bags and made the move to New York City. He began concentrating on song writing and honing his front man skills drawing on influences from Joe Cocker, Springsteen. Dylan & Mellencamp amongst many others. James: “There was never any shortage of amazing music playing around my house growing up. My parents had unbelievable taste. They introduced me to all the greats. I remember it totally making my head spin around”. Picture Bob Seger getting into a fist fight with the Beach Boys and that’s my son. He can go gritty or pretty….” says Brent’s dad Robert.

After a move to Cincinnati, Brent was introduced to his current band fittingly named, The Vintage Youth. The bands first show was with longtime supporter Ted Nugent and they’ve been touring since. They’ve shared the stage and/or toured with the aforementioned as well as The Cadillac Three, Eric Church, Daughtry, Huey Lewis, Foreigner, Candlebox, American Aquarium, Buckcherry, Walk Off The Earth, Robin Trower and more. With 2 EPs and an LP released, the bands much anticipated new record, “Waiting So Long” will hit stores October 26, 2017 . Their songs are engulfed in truth, life, loss and finding your own space in a crowded world. This is true original songwriting. Look for them in a city near you and keep an ear on the railroad track for their single “Masquerade”.

Pencils of Promise is now a global movement of passionate individuals, many of which are the most dynamic and impactful leaders we have ever seen. They are committed to supporting a world with greater educational opportunity for all. Thousands have joined us, making contributions through acts both large and small.